Tangles from my hiatus

It's been a long, long time.

I still somewhat practice Zentangle at least several days a week, but many of them are in my bullet journal, on a napkin, or wherever I can find a snatch of clear space...which clearly doesn't do it justice and isn't being true to the meditative form. I'm on a mission to get back to basics and do it right moving forward.

There has been so much going on, I can't even begin to make this post anything resembling a coherent, topic-driven post, so instead, I'll just put up some of the tangles I've done in my absence. 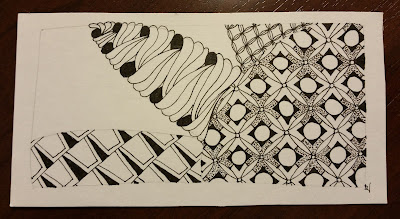 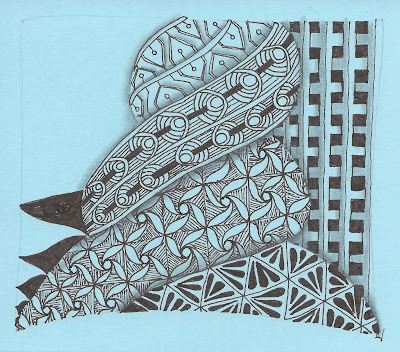 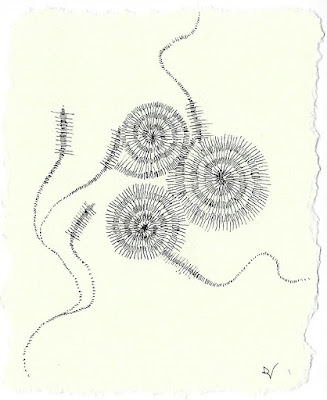 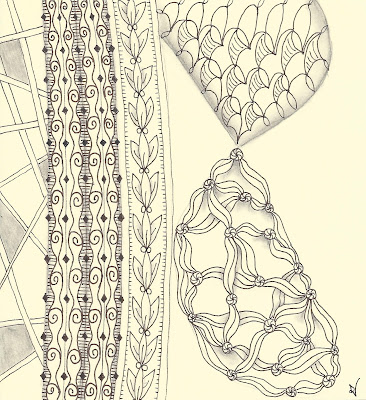 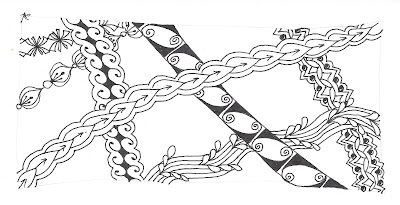 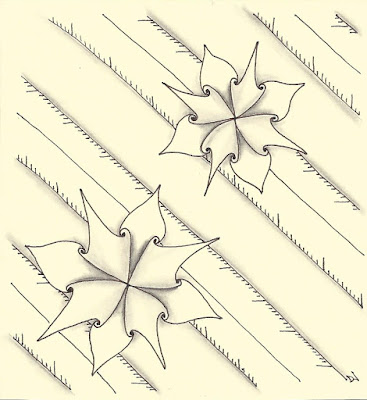 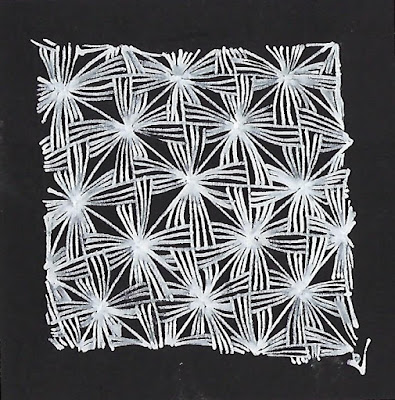 Posted by Unknown at 7:05 AM No comments:

I don't even know how long it's been since I had time to post a challenge from the diva, but it's too long.  I still do some sort Zentangle almost every day, and I'm convinced that it has done me nothing but good.  I do occasionally get a little carried away with it, but mostly I just make it my "me time" and go about my day.

This week's challenge was to use the new official Zentangle pattern Molygon, recently released in the Zentangle Newsletter (which you can sign up for here or on the diva's site).

I do believe I may have overdone the coffee this morning.

But it may also be true that lately I'm suffering from a bit of "FOMO"--which I recently learned means "Fear Of Missing Out"...and this often describes me to a T.  I am a learn-a-holic, and I am ever thirsty for new experiences. Sometimes my tangling is full of this piece of me, and today is certainly one of those days. 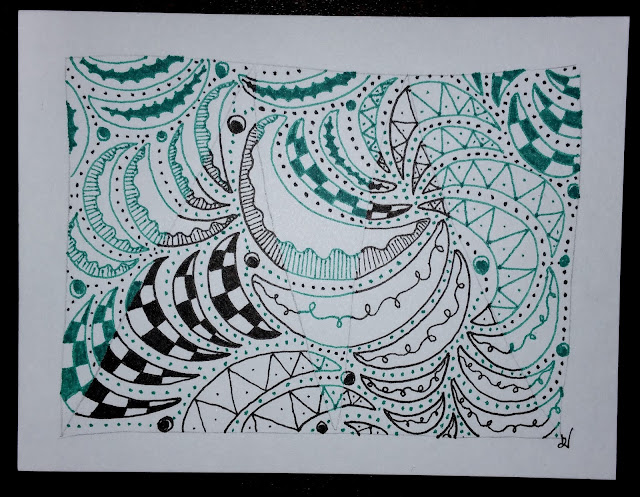 And I just realized that all those dots make it look like some crazy Pac-Man thing. Funny :)

Here's hoping that everyone has a joyful day.
Posted by Unknown at 6:12 AM 5 comments:

From the diva: Weekly Challenge #199: "UMT: Hitch by HeidiSue"

It's been a bit of a crazy week, so I'm keeping this short and sweet.

Thanks for the challenge--as usual, I seem to respond well to direction (oh, if only that were true in real life!)... 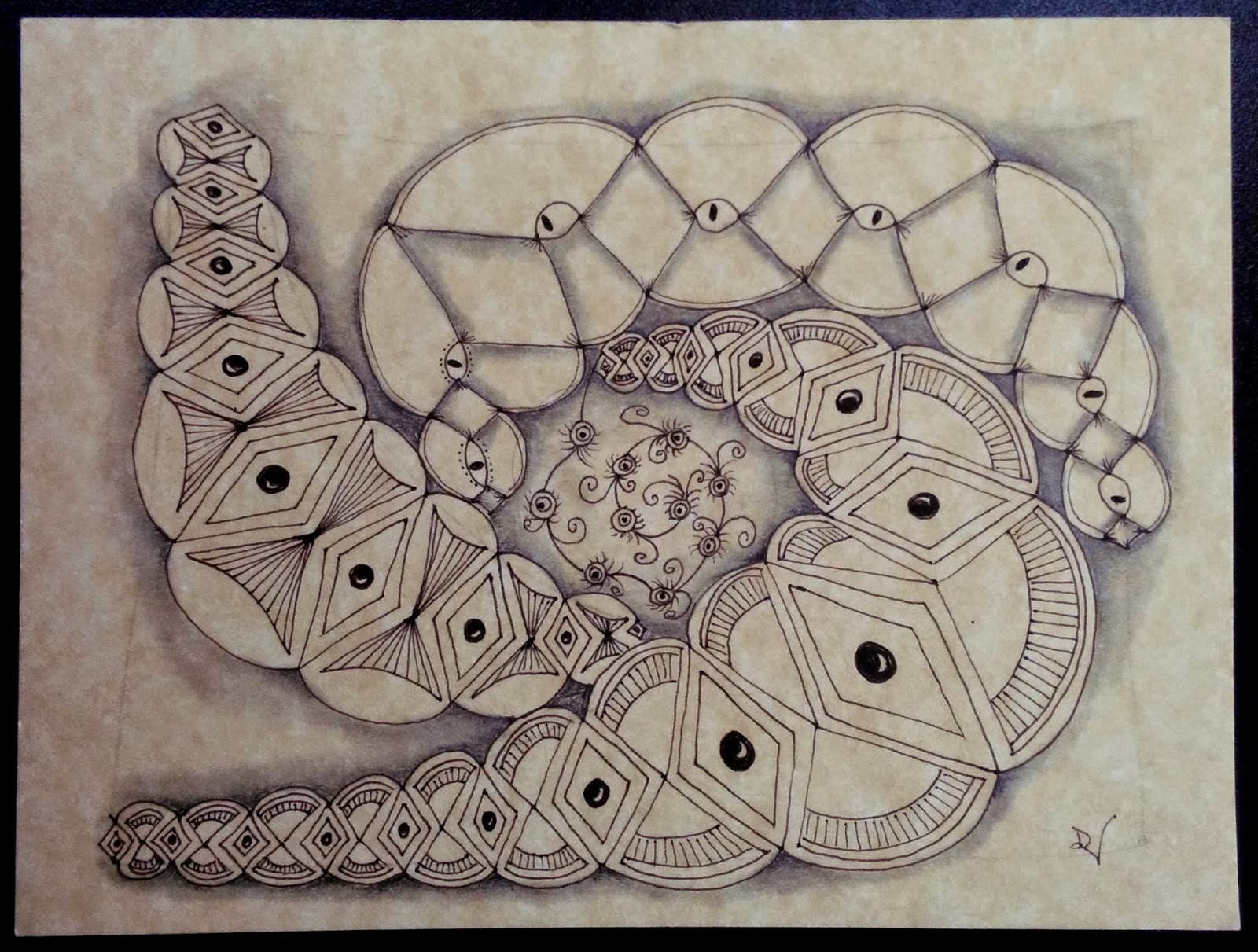 I had been playing with Julia Ross's new pattern Jesterz, and I ended up drawing a Jesterz-string and filling it with different forms of Hitched--the focus of this week's challenge.  Turned out nice, I think.

Thanks also for the link to the challenge on Tanglepatterns.com - I can't believe I'd forgotten to check the diva's site after her 2-week vacay.

It's never been easy for me to refrain from over-thinking, and Zentangle has rarely been any exception.  I often struggle with it, putting way too much thought into anything and everything.

This week's KISS challenge is a welcome reminder for me, and I've got 2 tangles to show for it. 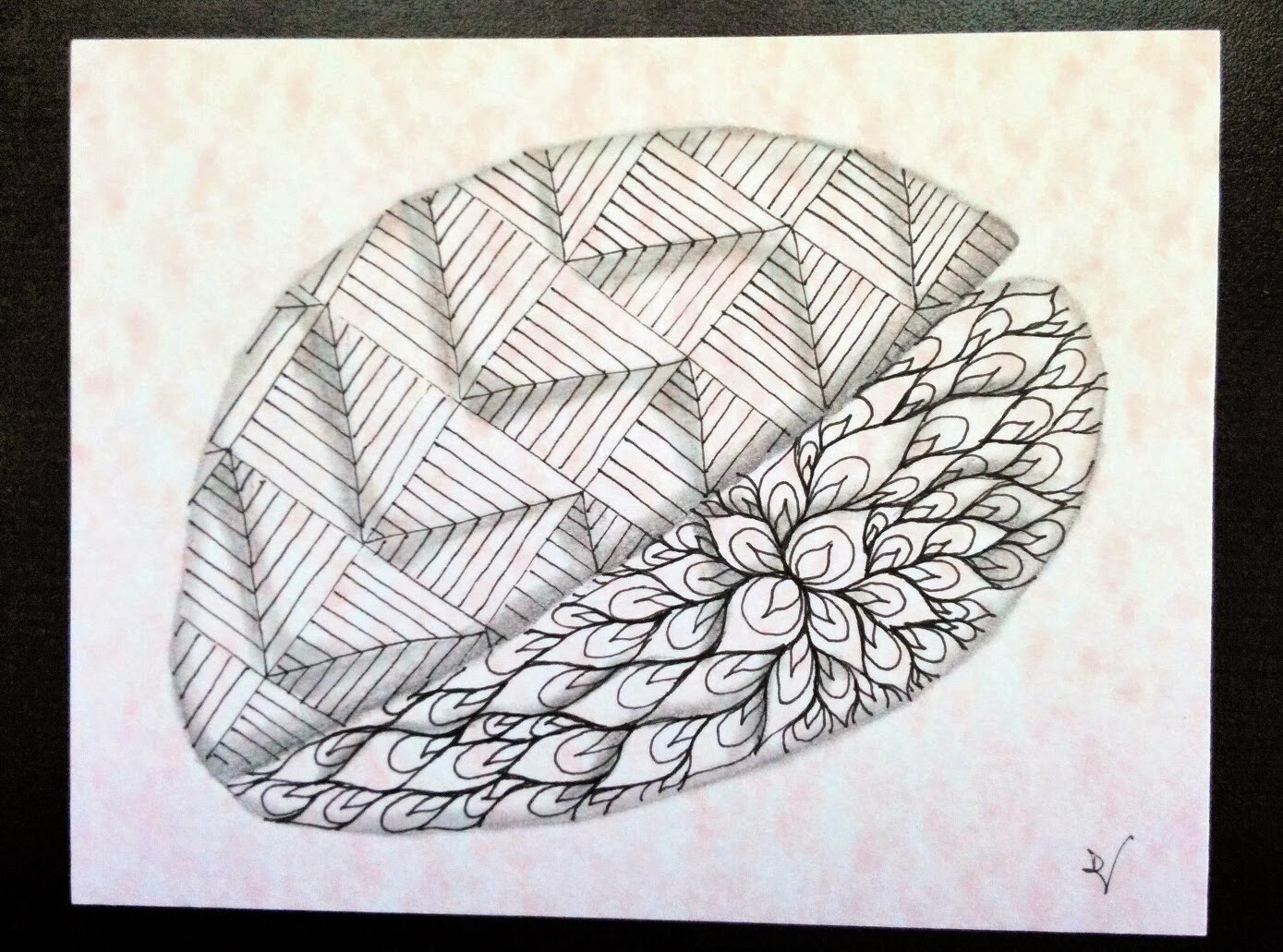 I was drinking coffee.  See the bean?  :) The patterns are Chard (by Linda Farmer) and Mosey, which is one of my own.  You can see the step-out here.  Feel free to use the pattern if you like. :) 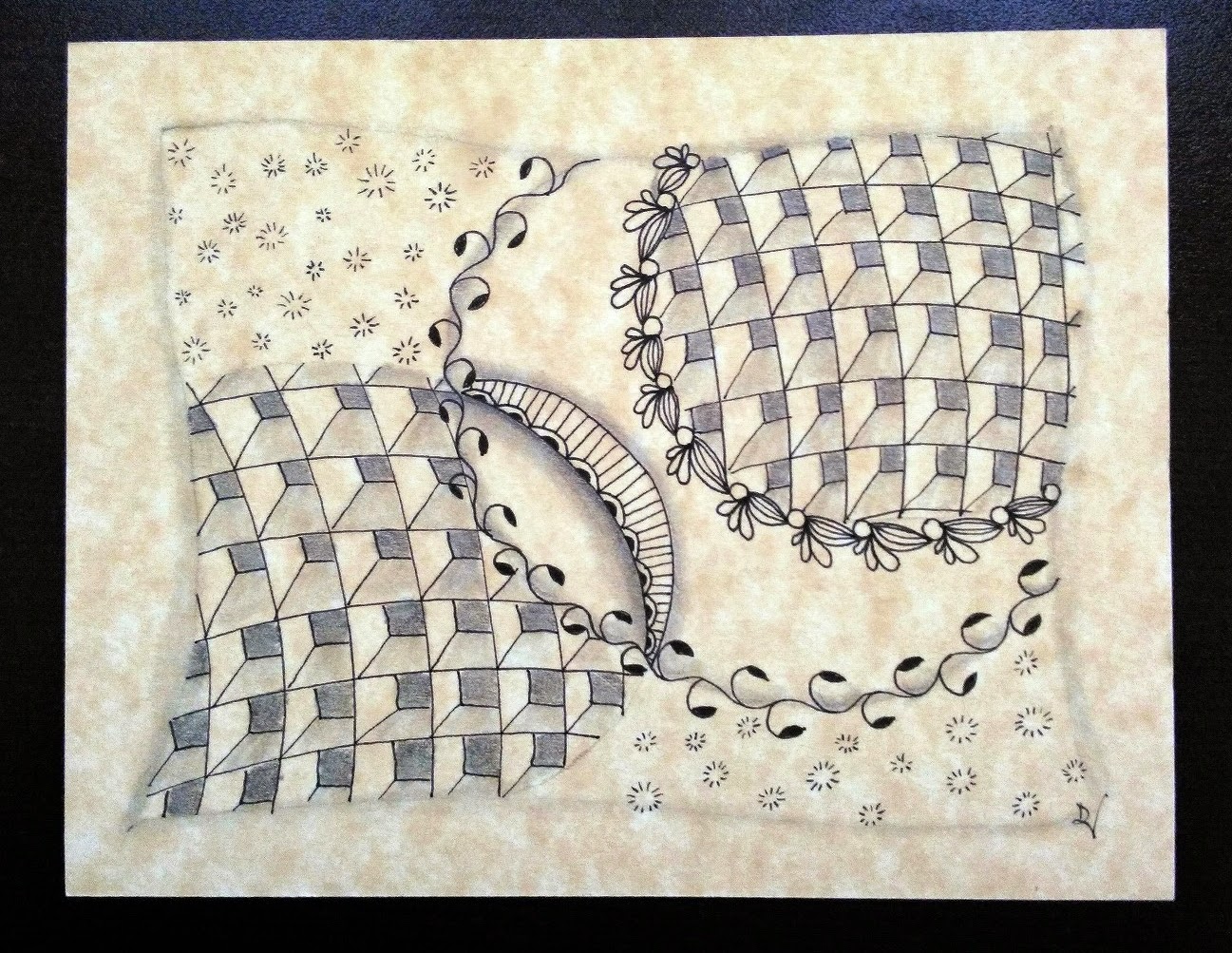 I rather like this one. I made it a point not to fill every space (something I tend to do).  I used Cubine (a ZT original), CO2 (by Antonine Megger), Reticulated (by Livia Chua), Girlande (by Simone Bischoff), and a rather simplified version of Scrawlz (by Jane Dickinson).

I hope all of you have a simply wonderful holiday, and I leave you with something I ran across on social media this week.  It has nothing to do with the challenge, but it's a beautiful reminder of how we all shouldn't believe we see our own beauty accurately. 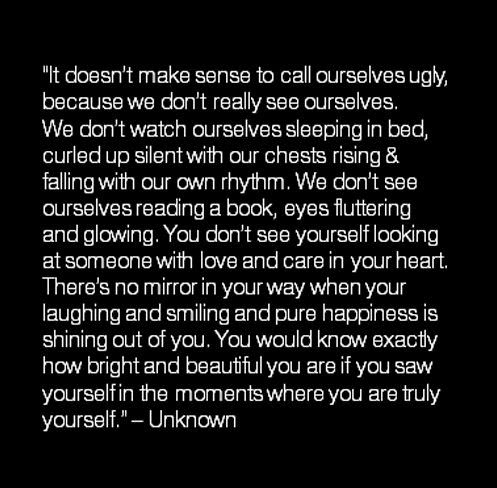 After a LONG Hiatus...the diva's Weekly Challenge 194: “Embracing the Yuck”

I know we all slip off the face of the world for a while, and I really seem to have a talent for that.  Since I last blogged here I found myself inundated with everything, from inside and out.  Work, volunteering, sewing (more on that in a later post), traveling...combined with a mind that has decided to absolutely explode from all the stuff I want to do...

Let's just say I've felt scattered.  It occurred to me a week or two ago that I hadn't tangled in ..

So I began again, and I really should never have hit the pause button.  3 days of meditative tangling and I already feel the difference.

I hopped back over to my favorite Zentangle challenge at http://iamthedivaczt.blogspot.ca/ and found this week's challenge--to use the non-dominant hand.  This is bad enough on its own, but I also opted to use tangles and styles I normally avoid, which basically amounts to putting myself in the most uncomfortable situation and then wallowing in it and figuring out how to make it work. 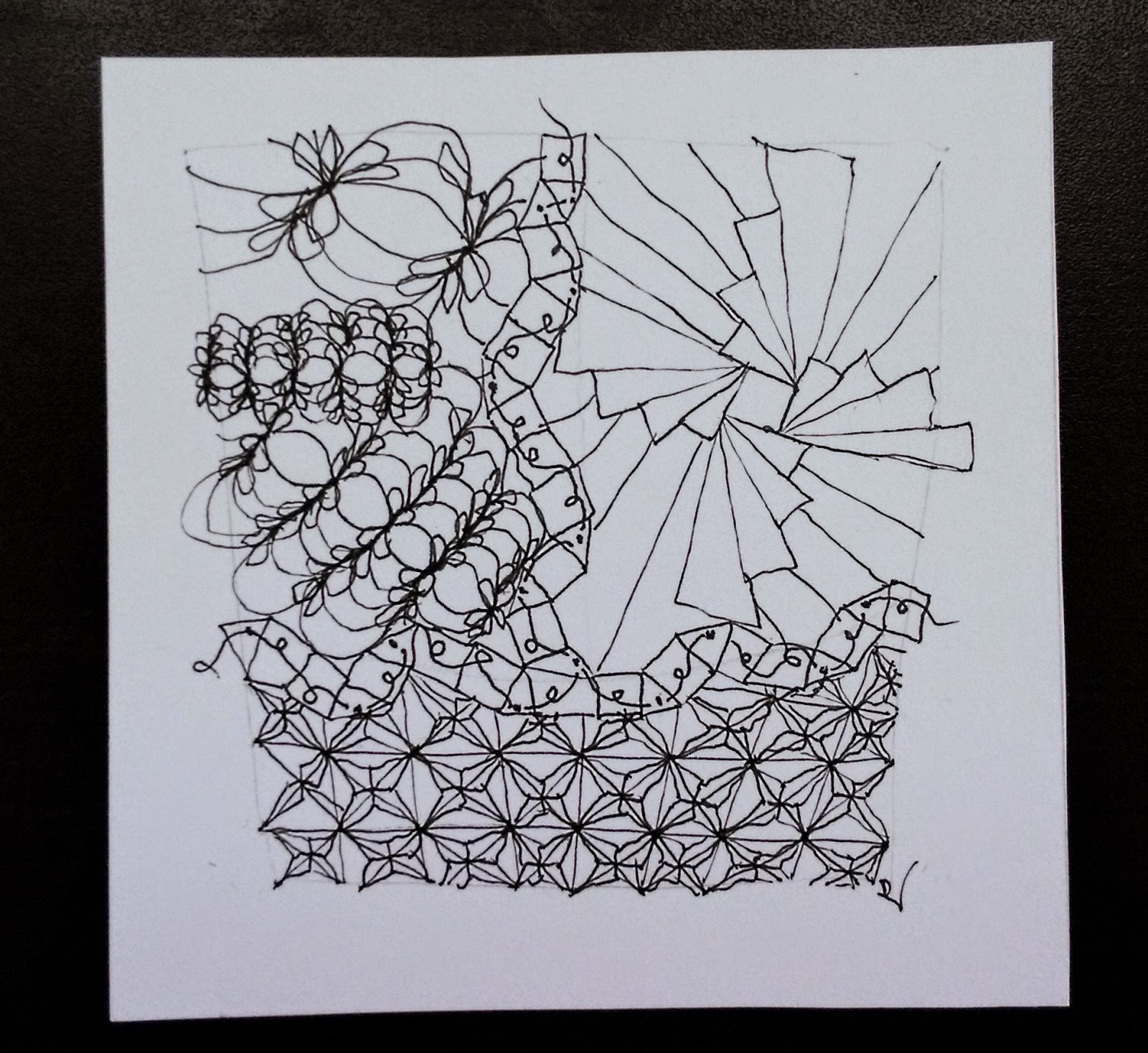 Although this isn't one of my favorite tiles ever, the process of creating it was probably the most thought-provoking ever.  That may not be very Zen, but it really was enlightening.  Here are some of these moments, along with their little epiphanies--
As my shaky left hand tried to to straight Quiltz lines (and failed spectacularly):

"You know, I couldn't make these wavy lines so consistently with my right hand.
Sometimes you get something cool from something entirely uncomfortable."

When I was tempted to quit 2/3 of the way with the Quiltz and just leave it at that, I pressed on. After completing it, I was glad I forced myself to finish...it really did look better.

As I tried in vain to get the smaller Uni on the left to look right, I had a couple of thoughts:

"If it's hard when it's small, make it BIGGER.  At least I'll be able to see where I went wrong...
and boy, doesn't that have an application in life??"

"Wow, sometimes if something seems hard, it's because it's really HARD.
We shouldn't be so hard on ourselves, but should celebrate the times
when things actually work.  It's a big accomplishment to get it right,
so we shouldn't take that for granted."

Thanks to Elisa Murphy (guest blogger) for a challenge that stretched me in all the right ways.  You can find the challenge here.

Ahhh....the beloved Fibonacci sequence meets nature meets art.  What? You've never heard of the Fibonacci numbers?  Well, do I have a treat for you...

If you love to read, and if you are remotely interested in mystery, history, chess, math, or just about anything else, you'll love this oldie but goodie by Katherine Neville called The Eight.  I had absolutely no idea whether it was still in print, but it is available in paperback on Amazon, and although it was her first novel and somewhat lacking in some literary-snob ways, the plot is AMAZING and it's a great intro to the math of music and nature.

Anyway, I digress.  Here are my 2 tiles, which I had enormous fun squeezing into a hugely busy work week. 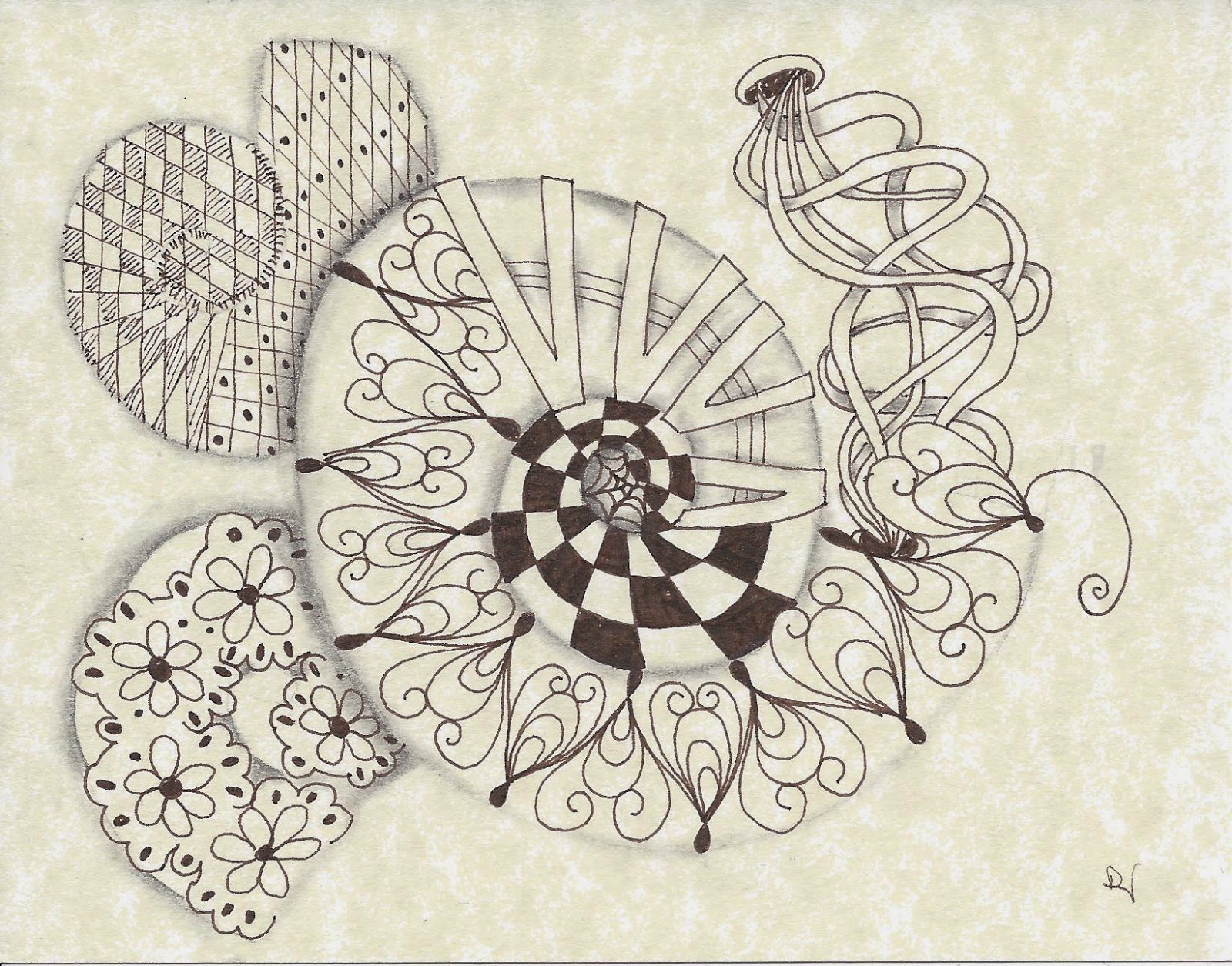 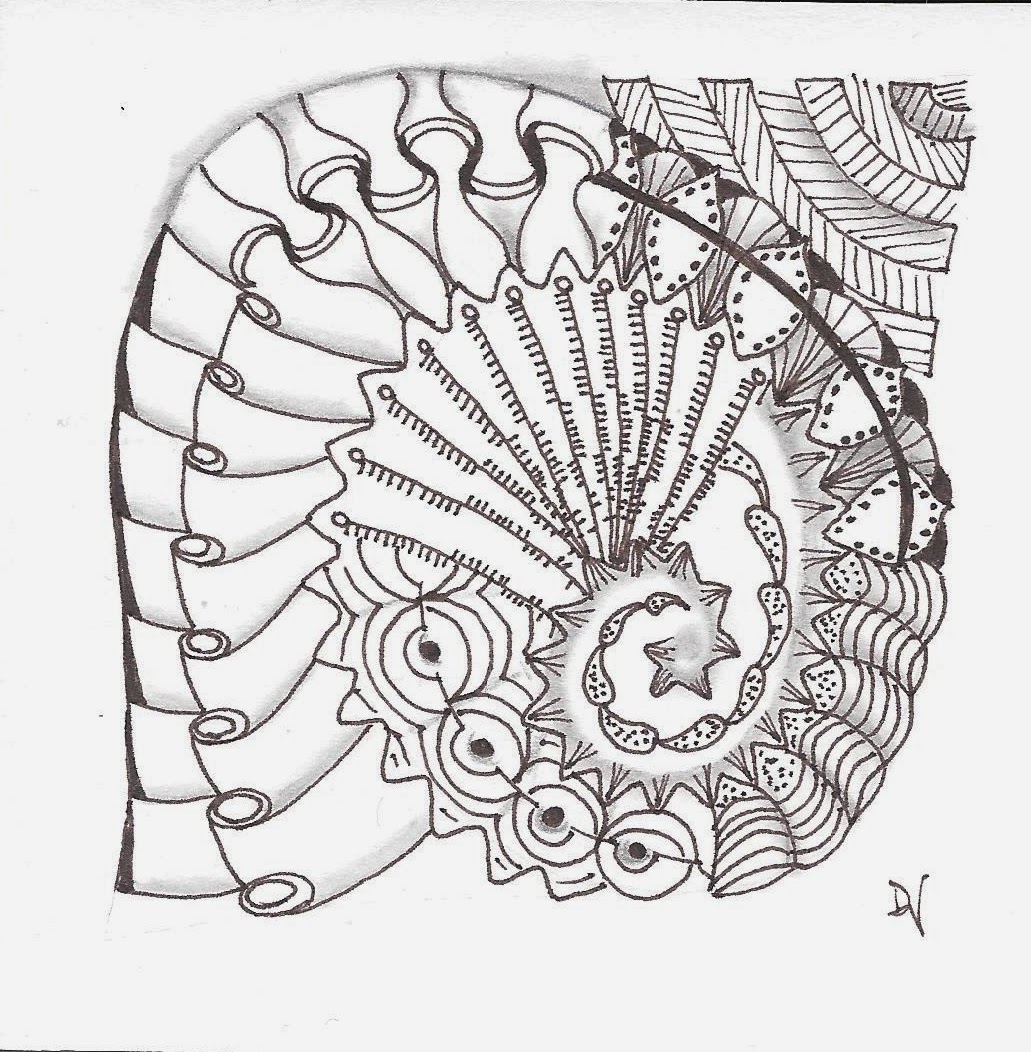 On a side note, I sincerely hope you all are beginning to experience Spring.  I'm thinking we may just entirely miss that here in Ontario.  So I've decided to run away to Florida for a week in April.  HA.

This week from the Diva: Weekly Challenge #156: "Curvy Gridlock"

Maybe everyone gets into a rut from time to time...I know that I sure do.  Sometimes it amazes me how much the Weekly Challenge from the Diva can do toward breaking me out of a rut.  I simply couldn't get it together enough to come up with something I really liked for this week's challenge, but it was mostly because all day Monday and most of yesterday I was feeling so restless.  Nothing seemed to be the thing I should be doing.  I did work, but I was for some reason utterly distracted the whole time...distracted by what?  Beats me.

Later in the day, I took a break and decided it was time for a little meditation via Zentangle, and wouldn't you know it?  Out of that 20 minutes or so, a new pattern found its way out of my pen, and I felt peaceful the rest of the day.  Bonus...the feeling carried over into today.

So here are my responses to this week's challenge.  The first is from Monday, and I was less than thrilled with it.  I just wasn't feeling it.  I did enjoy using Beth Snoderly's new pattern Phen for the first time, though.  I really love that pattern and will be playing with it more. 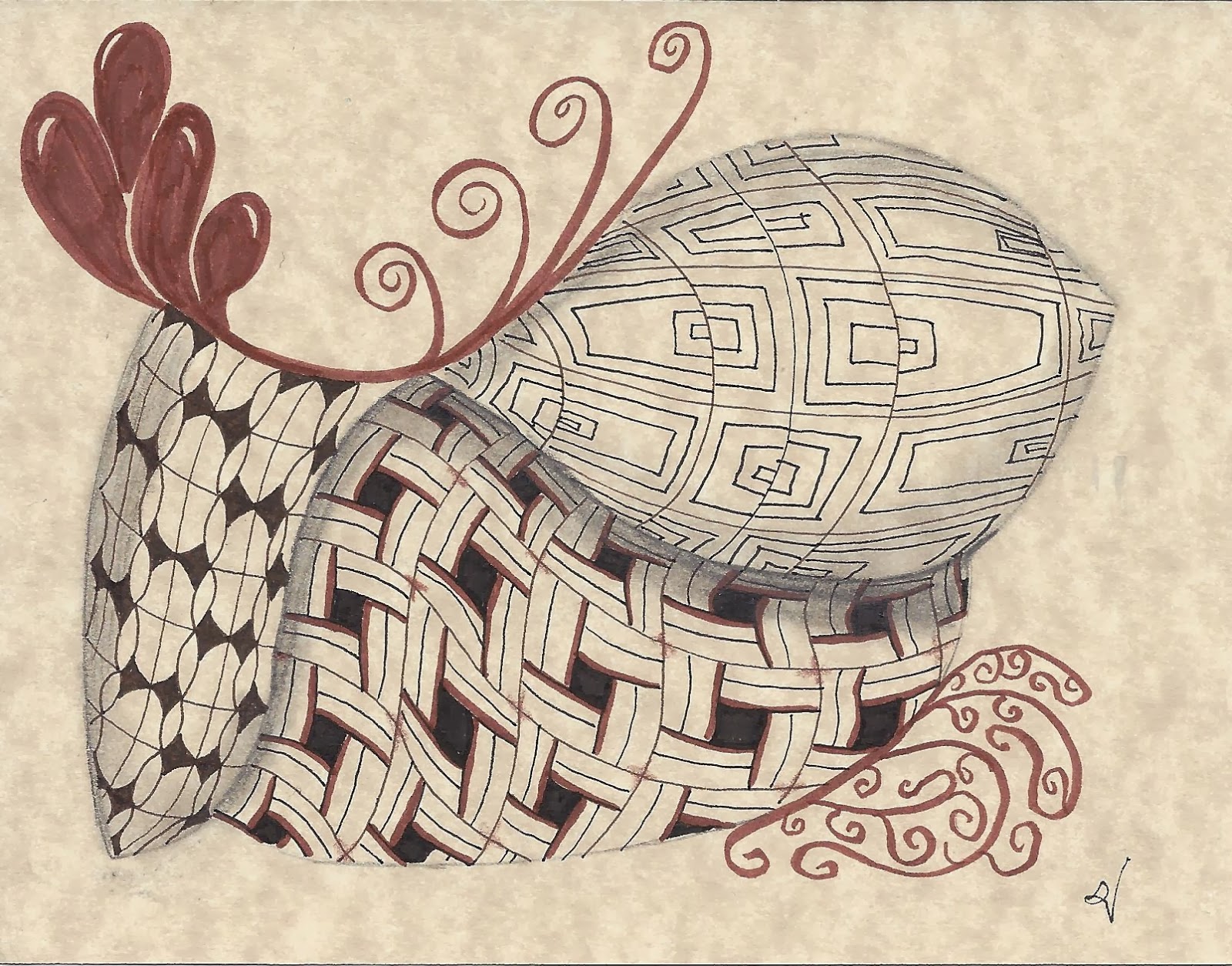 The string for this one was completely random, and the
patterns I used were
Phen, a variant of Quare, and Up and Across

And here's the tile I did last night.  I don't really think it's all that much better-looking, but it felt better. Know what I mean?  And best of all, I got to use my new pattern. 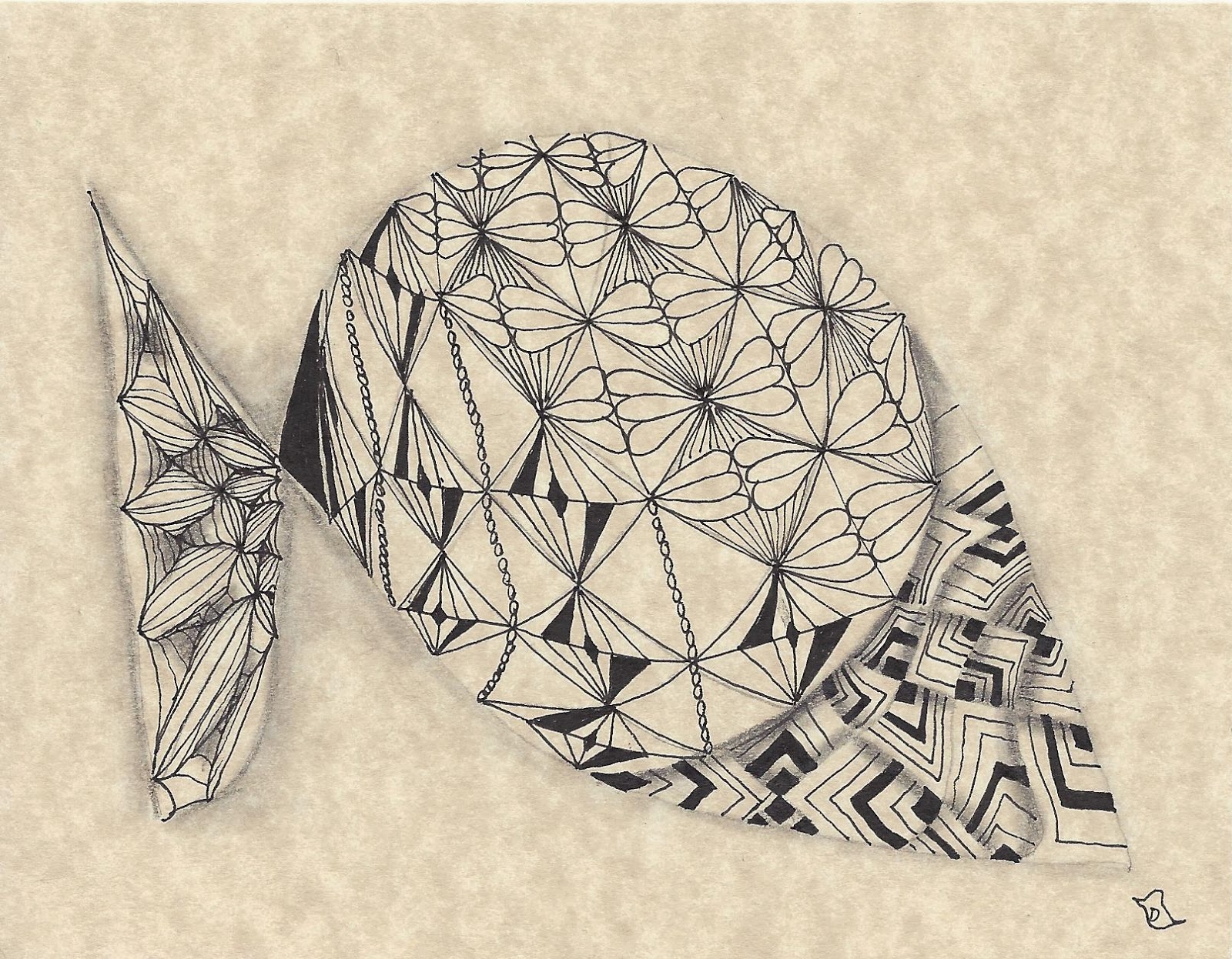 Random string again.
The patterns in this one: Graancirkel, Palrevo, Puf, and
my new tangle, "Grani".

I named my new tangle after my mother (that's what the kids call her, and she prefers this spelling.  Maybe to her "Grani" doesn't look as old as "Granny".  She may be onto something.  Here's the step-out for the new pattern. 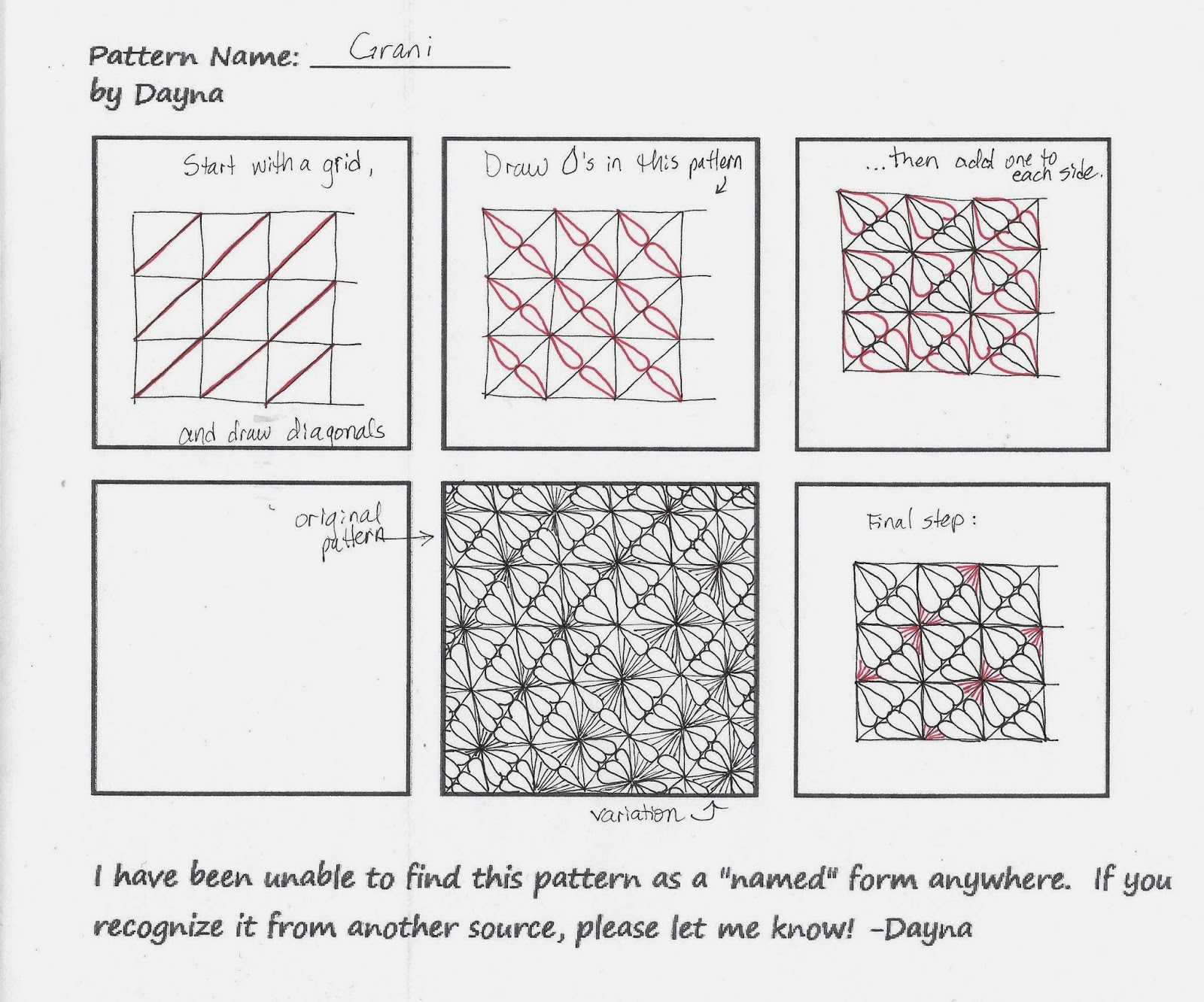 As always, PLEASE let me know if you've seen this pattern elsewhere.  I would never want to steal somebody's idea.  Even if it's just too similar to another pattern...TELL ME!

Happy tangling,
Dayna
Posted by Unknown at 5:44 AM 5 comments: