It's been a long strange winter already.  My first winter in Canada is proving to be an up-and-down experience, especially with my long stays in Mississippi when my dad was ill.  There's been a crap-ton of snow even for this area (according to the hubby). Since it has been melting for the last couple of days, I am feeling a Spring Cleaning bug.  So I'm taking this 15-minute break from cleaning to catch up with a little mental housekeeping, too.  I started this post weeks ago, and it's time to get a move on.

So what's this Grateful Zed thing about?

As I mentioned in a previous post, I have so much to be thankful for.  I am more mindful of the good things I have in my life, whether big or small, and I do find that it truly has had a positive affect on the way I feel every day. Instead of moaning over some thing or situation I don't currently have, I'm finding true joy in what is right in the palm of my hand.

It is important to note that I'm not doing these in order of importance in my life or level of gratitude...I just did them as dictated by whatever inspired me in the moment.

So enough of the sappy intro...here is the first set of tangles in this series. I will post five or so at a time, else this blog will get ridiculous, and I'm trying to put some design explanation after each one.

#1:  Gary
Gary is my husband.  I've been married before, then was in a long live-in relationship.  For years I was in something I can only call despair, thinking that I would never find the kind of love I wanted.  I'm neither beautiful nor rich, and I had lost all hope of finding love.  So of course, when I least expected it, I found my friend Gary.  At 40-something, I found the man I'd hoped for all my life right there in a man I'd been friends with for years.  Now I look forward to growing old with him. 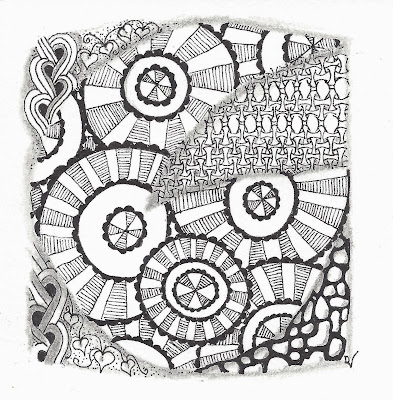 String: Sort of a G
Patterns in this tangle: Huggins (with variation), Heartrope (variation), Heartvine,
and a stone wall type variant of tipple (because he's my rock). And he's stubborn.  :)
And Oh MY GOSH...I don't know the name of the main pattern in the G.
It looks kind of Sandy Bartholomew-ish, but I'm not sure.
If anyone out there knows, please tell me!

#2  Savanna
My youngest daughter, Savanna, is my daily joy, my daily trial, and my daily surprise.  She's weathered so many changes... not the least of which was when we moved to Ontario from Mississippi in May of 2013, and though she protested (a lot), she's adapting very well.  She's writing her second book, too. This young lady is simply amazing, and I'm lucky to be her mom. 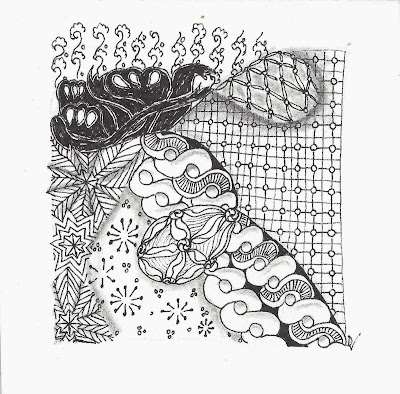 String: This is string #14 from TanglePatterns.com (she's 14)
Patterns in this tangle:
Screen, Annee, Vanity, Ahh, Nebulous, Netting, and Agua
My Nebulous is dark and foreboding, just like teen angst...
but the rest of the patterns are fun and bright, like Savanna.


#3: Daddy
My sister and I have half-joked (ok, maybe 1/4-joked) that our Daddy ruined us on men.  A man would have a hard time living up to my father.  He was a normal, flawed human being...as I was surprised to learn when I grew up...but he was my solid foundation, my helper, my instructor in all things mechanical or electrical or carpenter-y.  He taught me more than any other person...ever.  He was that guy that knew how to do almost everything, and when he didn't know how, he found out, and he made sure to do it right.  And in the rare case that wasn't possible, he had it done by someone who could do it right.  In short, he was a man who took care of things and people, whatever it took.  Though you're gone, I love you, Daddy, and I'm grateful to have been your daughter. 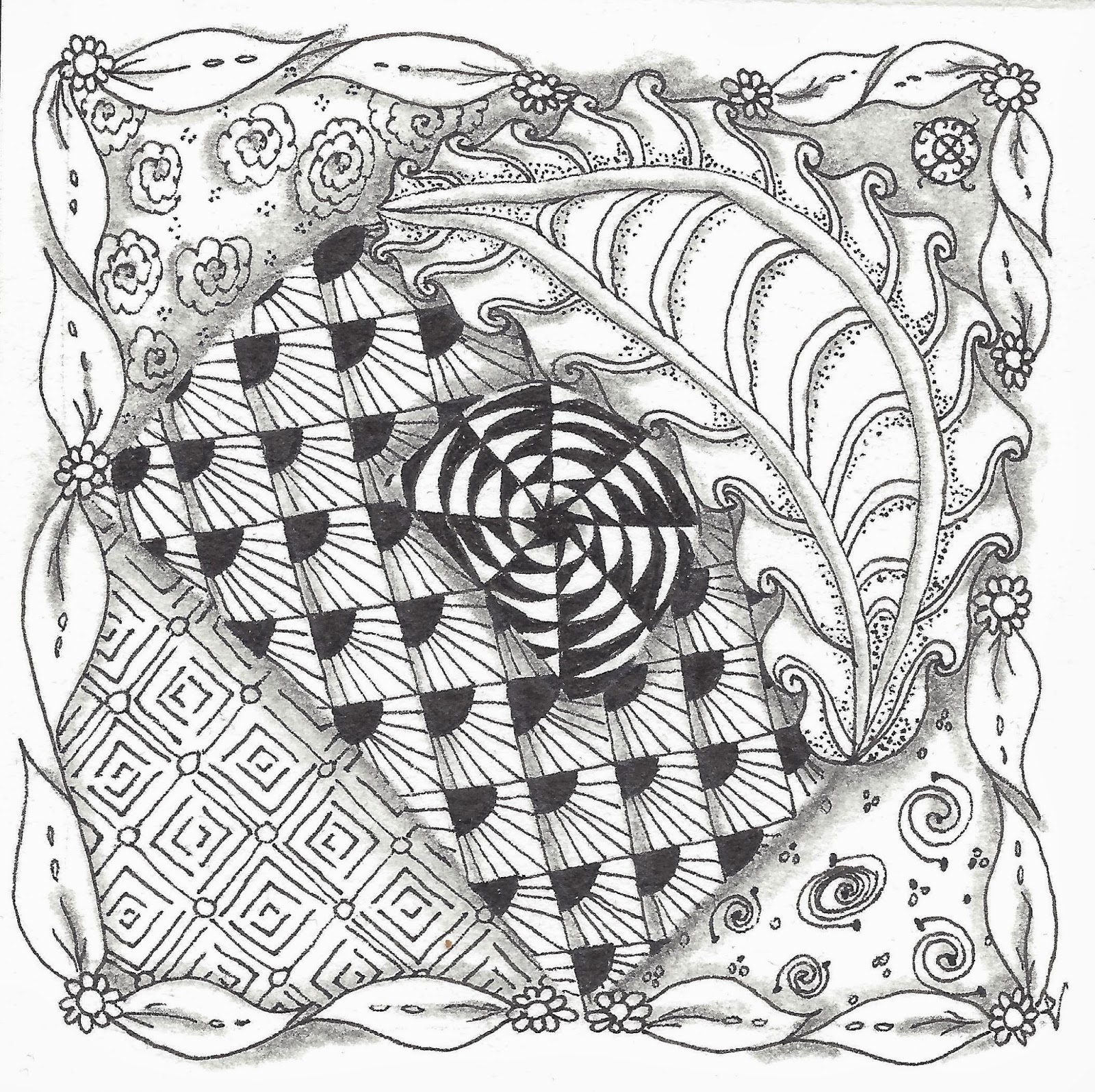 #4: Mama
My mother and I went through such a rough patch when I was a teenager.  I was moody, sad, and unpleasant, but at least I was self-motivated.  She worked long hours for most of the time I lived at home, and still she found time to spend with us, whether it was fishing, teaching me to use her sewing machine or make cornbread, or doing a puzzle with us on a rainy weekend day.  She's worked so hard all her life, and that is something I have definitely learned from her.  When I've had a hard day, I just remember the times Mom would come in after dawn to late-night driving that UPS truck, her clothes salt-stained from sweating in the heat.  I have it easy and I absolutely am grateful for every bead of sweat, every time she fussed at me for letting a dirty pot sit in the sink to "soak", and every moment I have had and will have with my Mama. 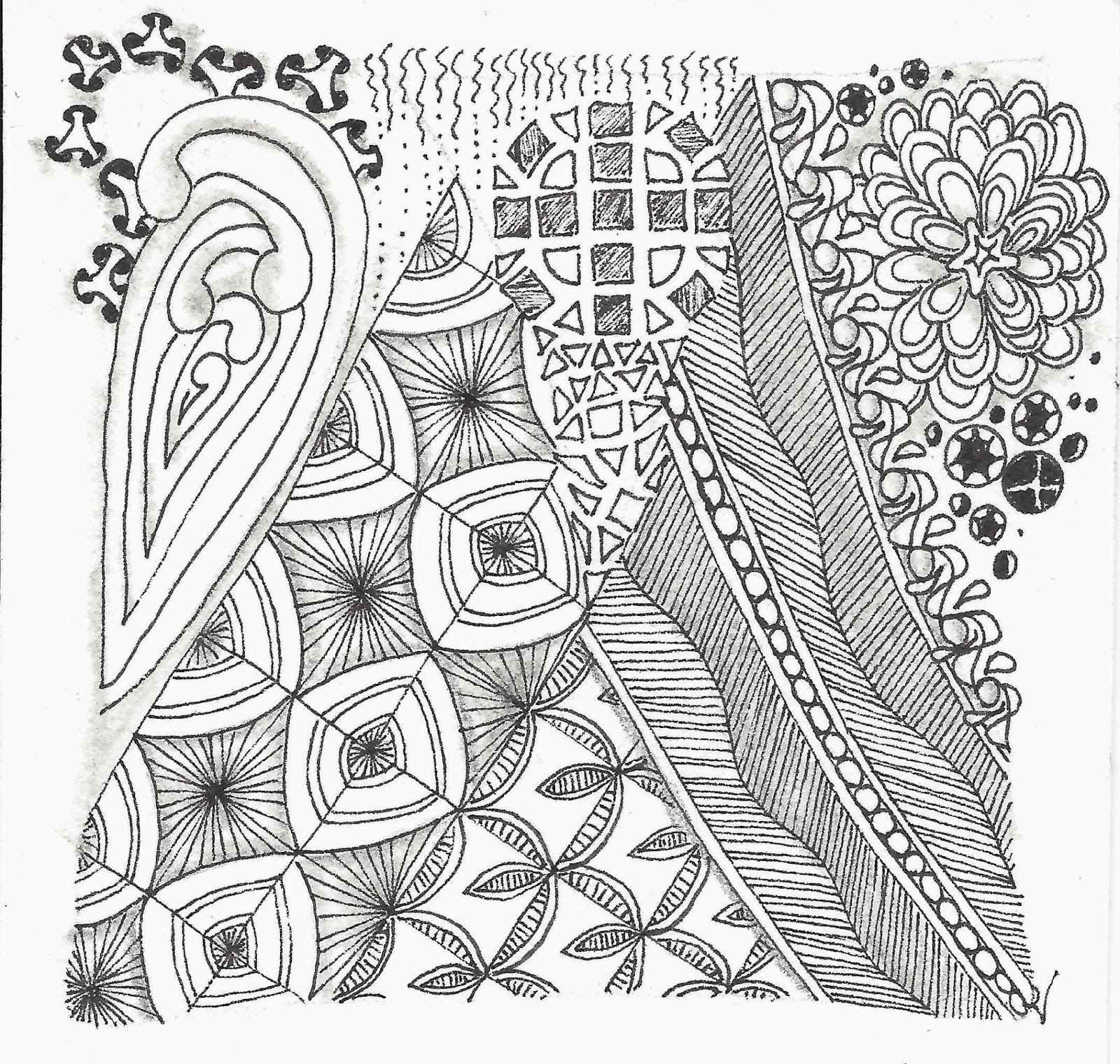 The String: An M (I swear)
Patterns in this tangle:  Mooka, Me Three, Meer, Miasma,
Maylea (well, half of it), Msst, Moon Rocks, Mumsy,
Man-O-Man, Miander, and Maelstrom.
The Mumsy reminds me of her hydrangea plant that
was in the back yard.

#5: 2014
Plain and simple.  I am GLAD to have another year on the planet.  That is a bigger gift than I knew for most of my life.  I am trying hard not to let myself forget that ever again. 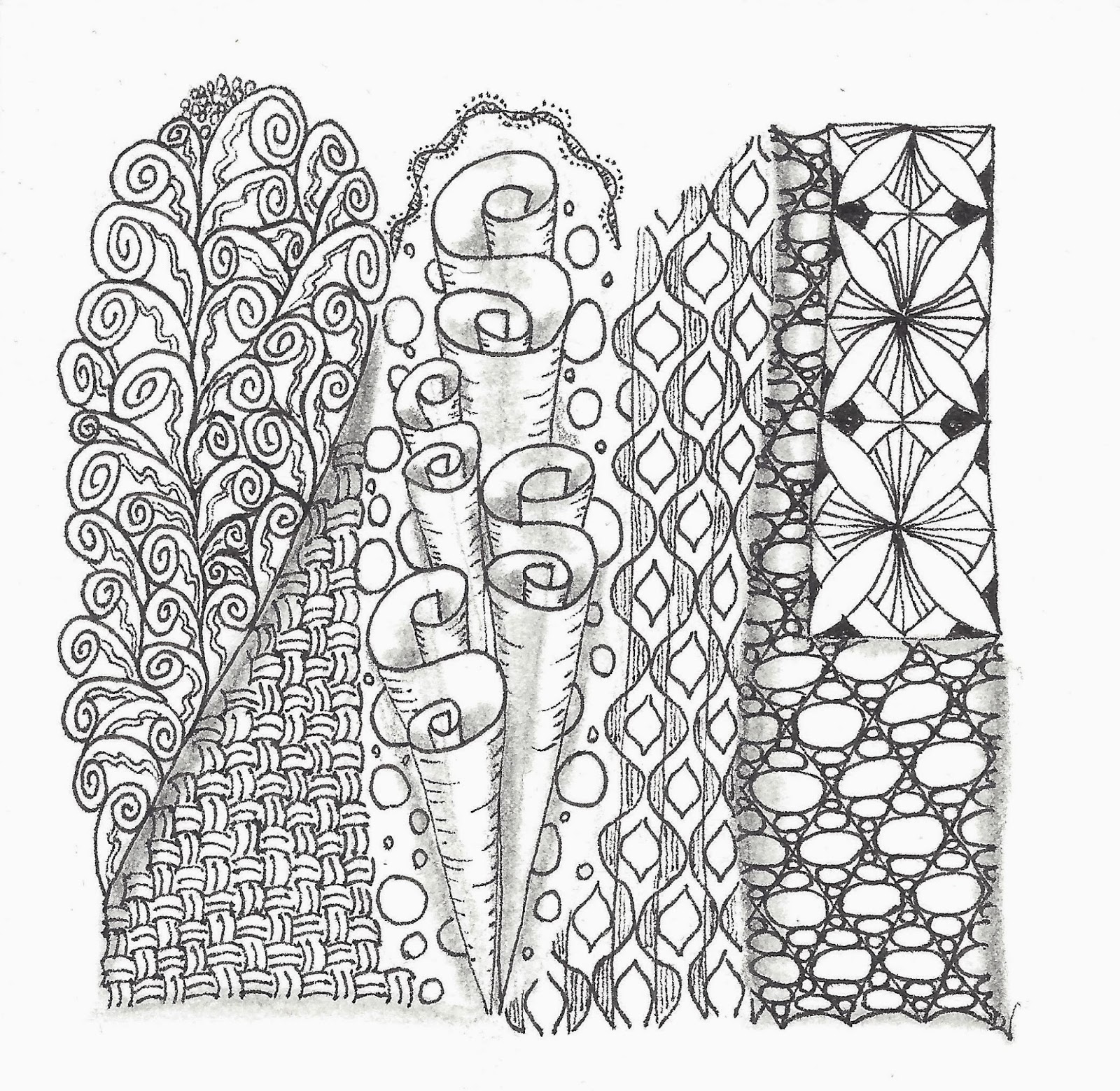 String:  "2014" is the string
Patterns in this tangle: Keeko, Zenplosion Folds, Falz,
Orbs-La-Dee, 4 Corners, and Paushalöv,
topped off with a festive bit of Organza

#6: My sister Amanda
I suppose many who has a younger sibling will understand the sweet, guilty, all-encompassing love that I feel for my little sister.  It is sweet because, in all sincerity, I do not know a sweeter person on the planet.  She is so warm and caring, and I don't know a soul who could say otherwise.  Guilty because I treated her so badly when I was a teenager and she was trying to hang out with me and my friends.  I should have known then that when we grew up, most of those friends would at best be occasional acquaintances, whereas she has become one of the most important people in my life and in my heart.  I love you, Mandy! 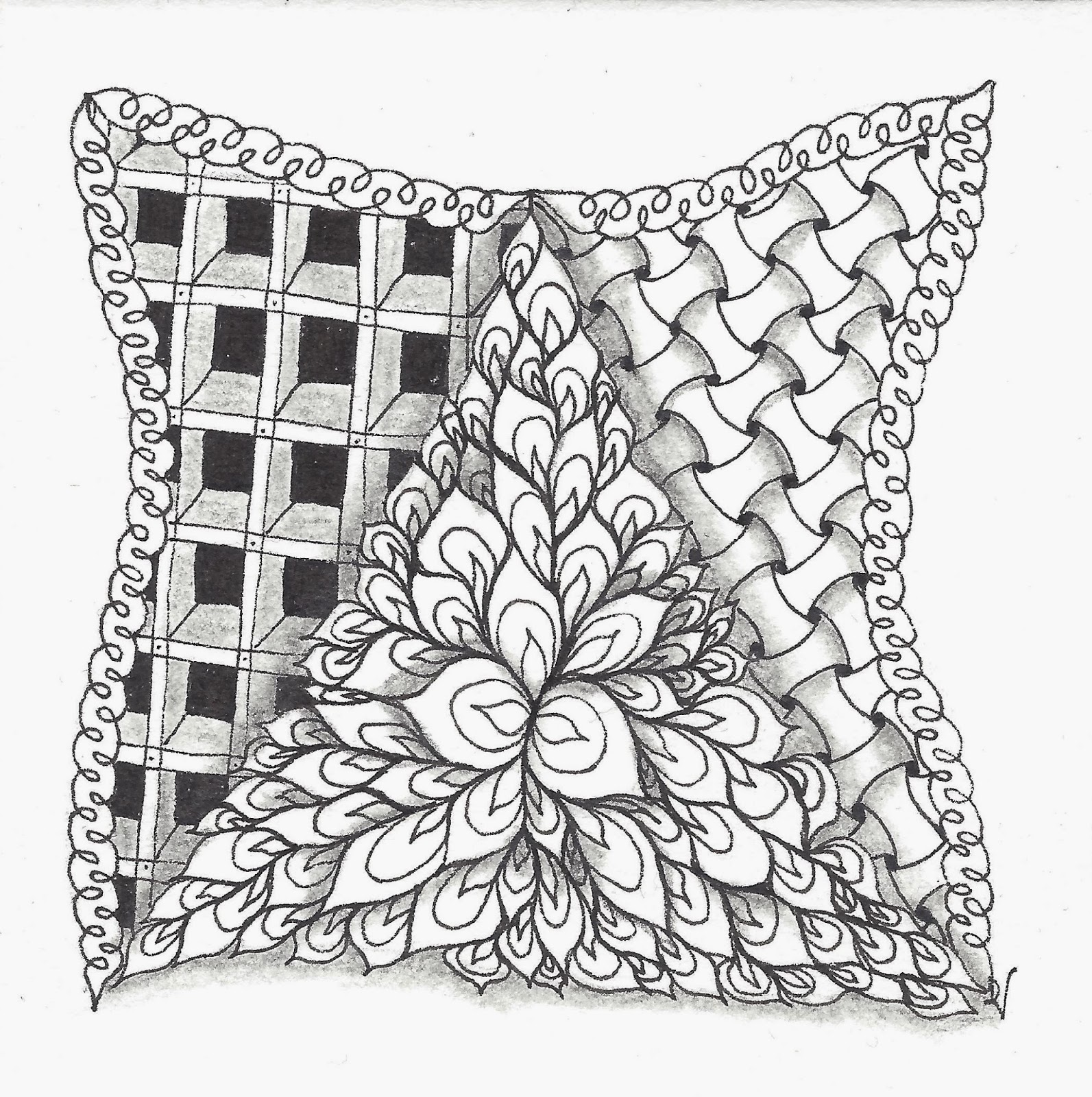 String:  It's an A...but without the bar
Patterns in this tangle: Eke, Huggins, Cubine,
and stars my new pattern, Mosey


#7: Mother Nature
No human-made creation has ever, in my opinion, topped the beauty that can be found in the natural world.  As a youngster, I was fascinated with the ocean and everything in it, and I even thought for a long time that I'd like to be a marine biologist.  Considering I'm a redhead...well, that's just ridiculous.  I realized the folly of my desire before wasting time and money on a degree in THAT.  But I did expand my love of the ocean to include Nature in general, and I love her still. 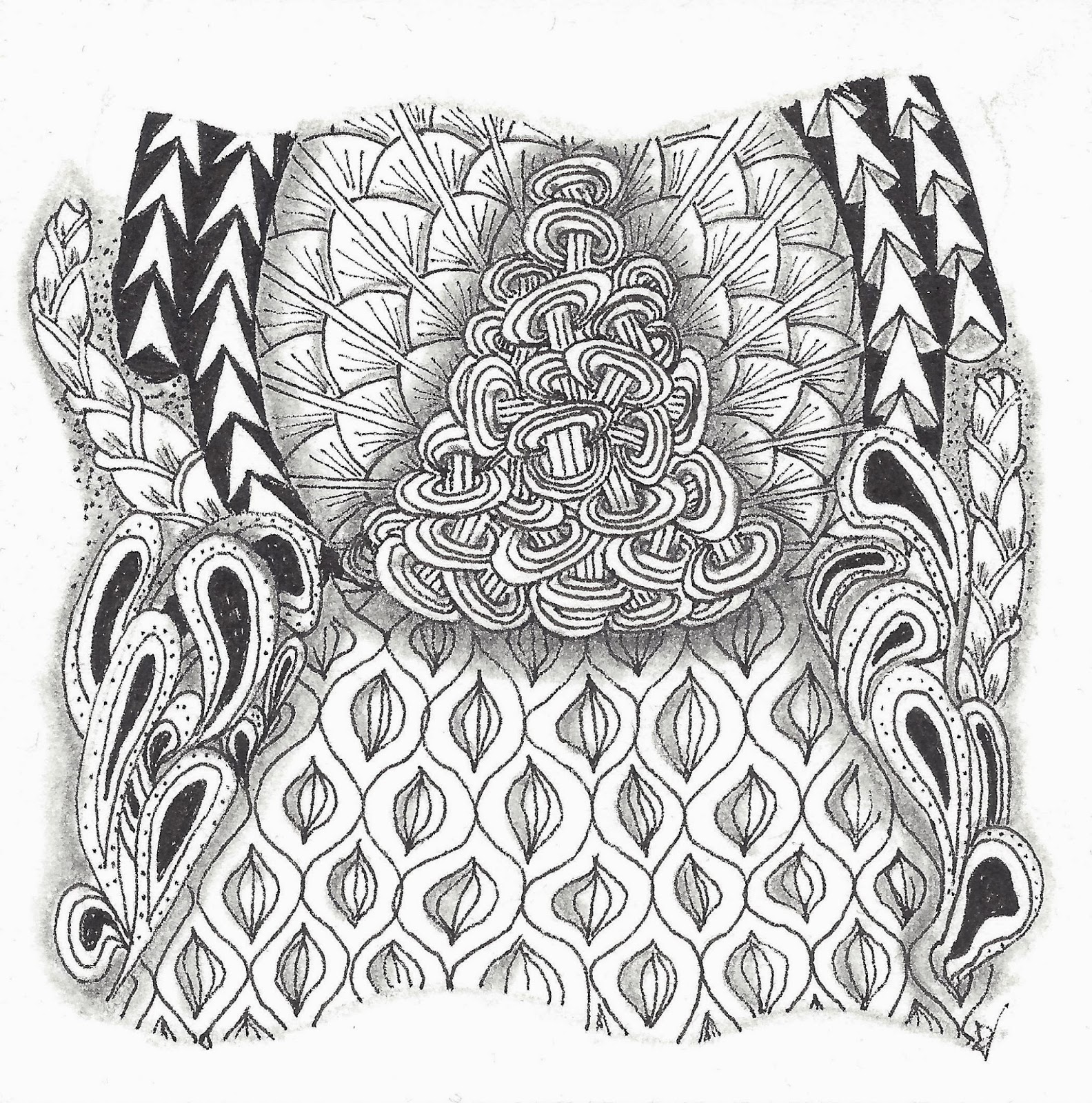 String:  Hard to remember, but I believe I went
with a string that looked like a sunrise behind a mountain peak
Patterns in this tangle: I stuck with patterns that looked Nature-ish to me...
Lantern-Pho, Wheelz, a variant of Pais,
Chainlea, a variant of Shattuck, and for the life of me
I can't remember in that funnel-shaped one has a name.
It's not Fungees, but it's similar.  Hmm.
Update:  I FOUND IT!  That one is Riki-Tiki.  Whew.

#8: Holly
My oldest child, Holly was the first person I knew for whom I couldn't fit my love into a neat little package.  I loved before her, but not in such an intense way.  I am so grateful for her (and all my children) that words don't say enough, either.

When I did this tile for her, I liked the meaning and the outcome so much that I decided to post on facebook a little explanatory diagram of the reason I picked the string and the patterns.  I was hoping to show some of my friends who'd asked just what this Zentangle business was about for me.  Here's the finished tile, followed by the "Guide" I posted. 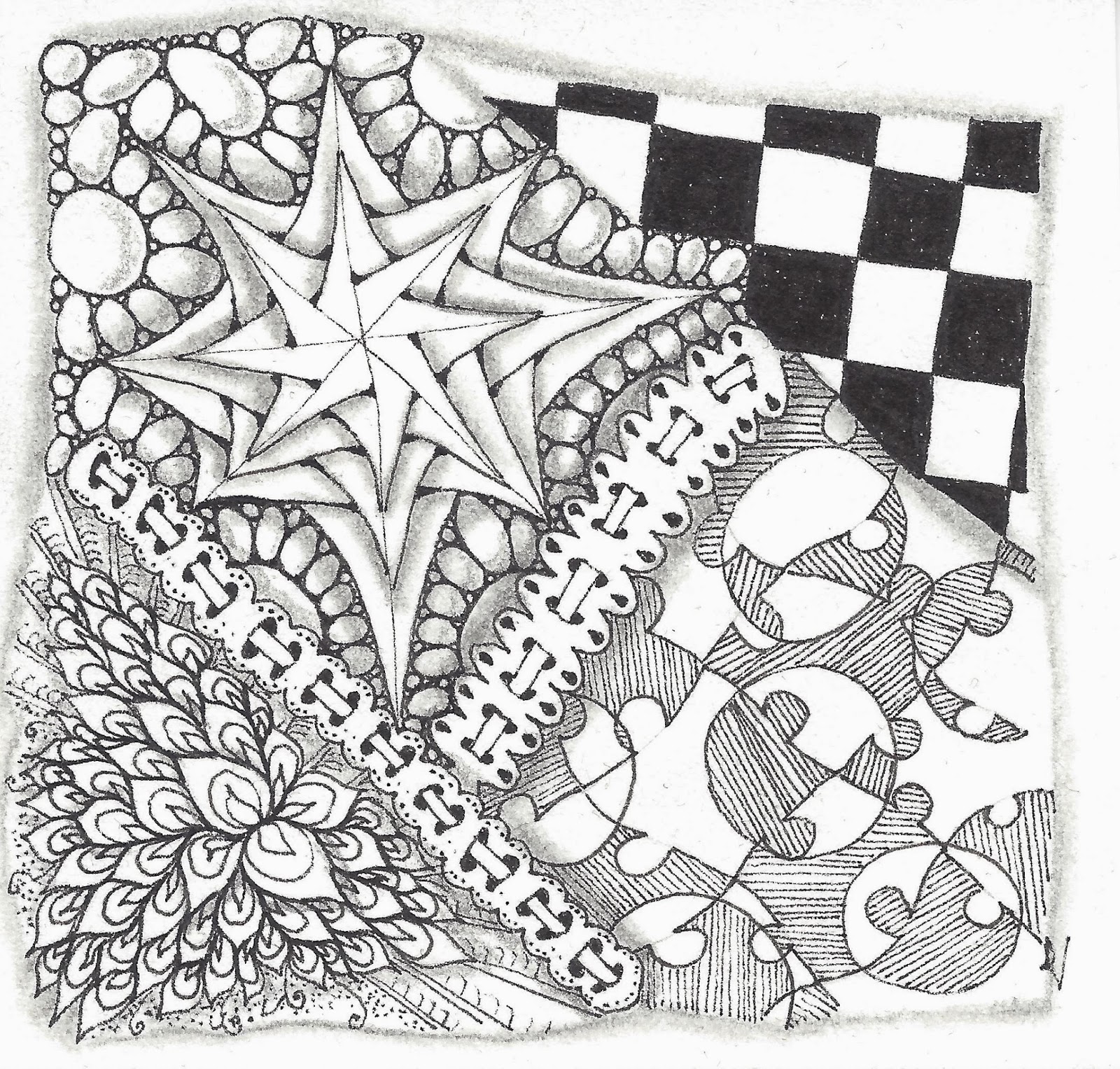 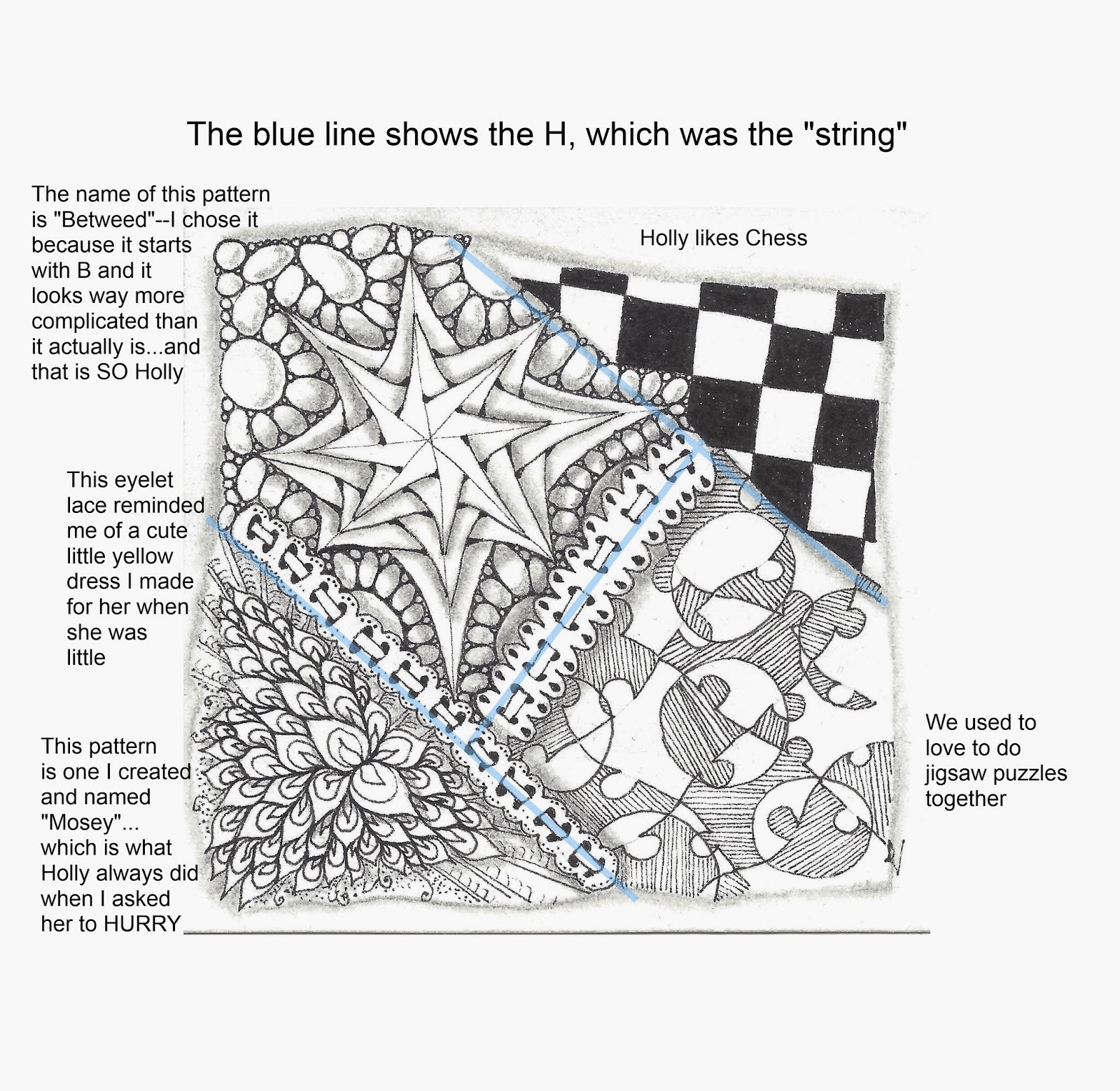 #9: Devin
My son was probably the most laid-back, smiling baby I'd ever seen.  Then he became the most active, inquisitive toddler, followed by the most boisterous little boy.  Now he's becoming the man I always wanted him to be. I am so, so grateful that he turned out tall (LOL!) because I'm only 5 ft short, and I have his father to thank for that.  He's a funny guy, and he's a hard worker.  I am very proud of you, Son. 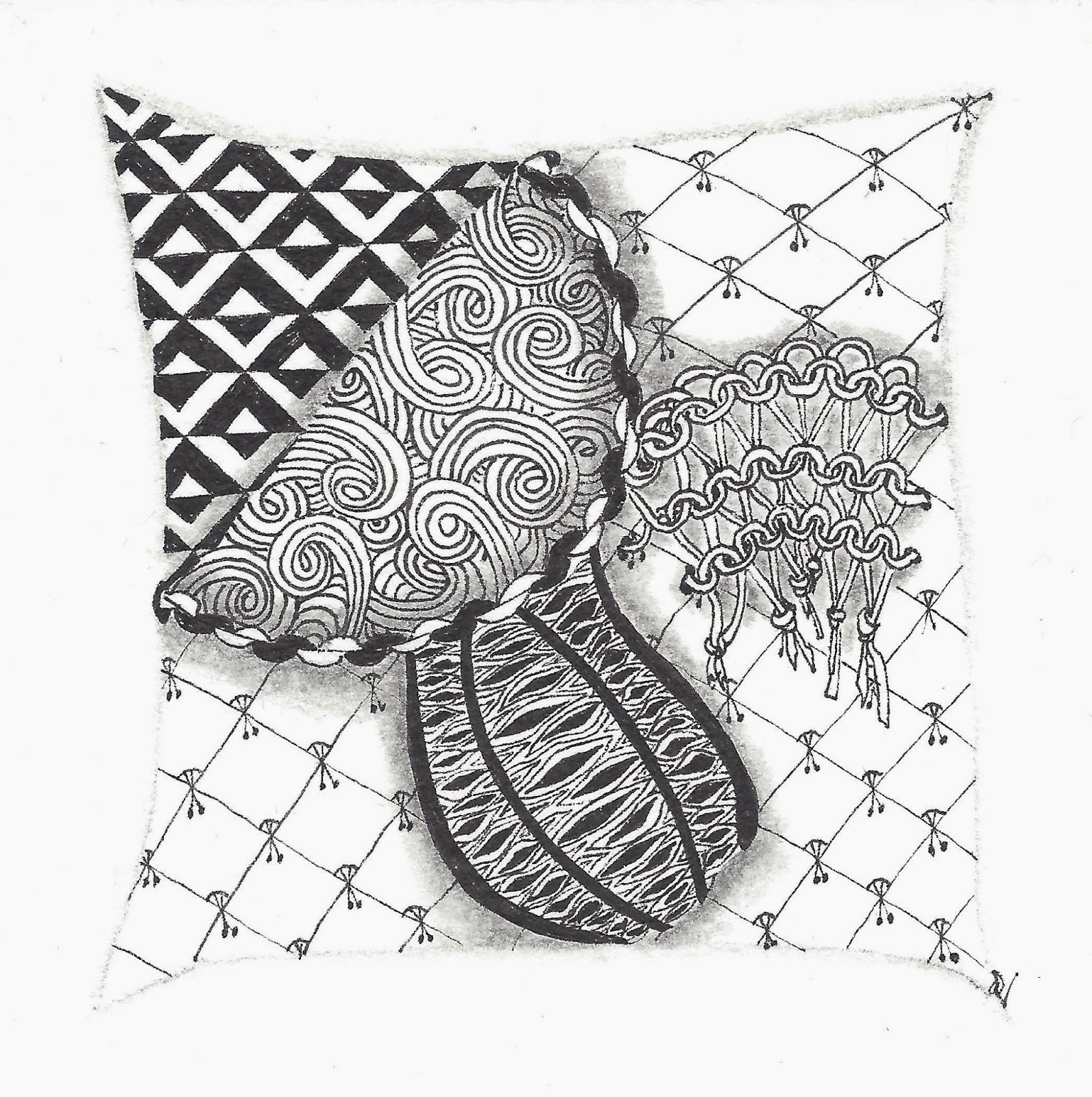 String:  A "D" and an "S" (for his middle name)
Patterns in this tangle: Demi, Sand Swirl, Via,
Knyt, Snookums, and another pattern
I can't recall the name of (ugh) or even IF it has a name.
To me, it looks like ceiling tiles with a little hangy-thingy (an ideas?)

#10: Home Sweet Home
On the day I did this one, I was so, so happy to be home, and so ready to go home.  I was about to go spend some more time at my parents' home because my father was dying.  I felt like keeping it simple, and wanted to practice my shading.  I still need to work on that. 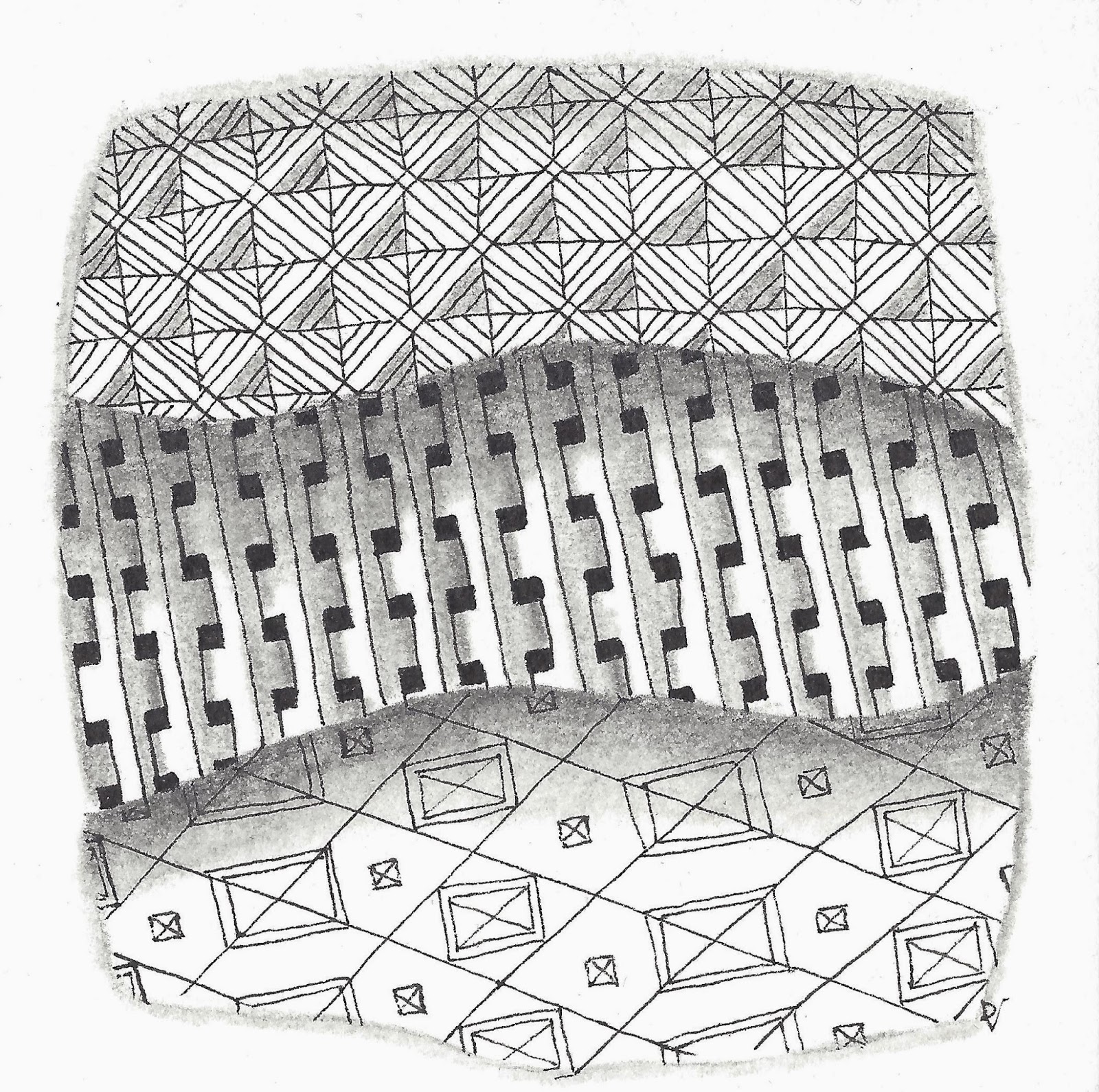 String:  Just split into 3 sections--Floor, Wall, and Ceiling.  Really
all the tangible structure needed to call a place a "home"
Patterns in this tangle:  Panthe (the ceiling),
Weben (the wall), and
something I adapted from Kitchener and other floor-like patterns

If you've hung with the post this long, kudos to you!  I'll try to take less than a month to put together the next installment of Grateful Zed.